Dr Louise Irvine is a GP who announced in September that she would stand against Jeremy Hunt in the general election next year. I spent a day with her as she met some would-be constituents in Haslemere, Godalming and Farnham. 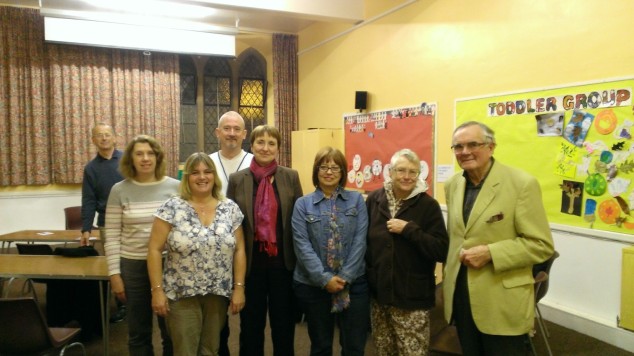 Dr Louise Irvine (4th right), with some of those who had come to meet her, in a church in Farnham.

I’ve often wondered whether alcohol has always gone hand-in-hand with anger towards the ruling classes. Did the ungodly who gathered in alehouses in 1650s England tell each other that they were “putting the world to rights”? Did the French Revolutionaries who abolished the tax on wine do so because their greatest inspiration came after a few glasses of red?

Arriving at the Apple Tree pub, in leafy Haslemere in Surrey, the crowd hardly seems poised to storm the walls of parliament. But the smartly dressed Scottish lady they’ve come to meet has an eye on upsetting the British political orthodoxy. Dr Louise Irvine, a GP with over 20 years’ experience in Lewisham, South East London, is aiming to unseat the Health Secretary, Jeremy Hunt, as the MP for South West Surrey in next year’s election.

She represents the National Health Action Party, formed by a group of doctors in 2012 in response to the Health and Social Care Act. “We formed the party because we had the feeling that politics didn’t represent people any more, which was exemplified by the Act,” she explains. “It was brought in on a lie. The election promise of ‘no top-down reorganisation’ was followed by the biggest top-down reorganisation in NHS history.”

She became a doctor for a variety of reasons, but the interest stemmed from her youth. Her brother – one of her five younger siblings – suffered from muscular dystrophy and died at the age of 19. She described his impact on her decision to become a doctor. “I was good at science, and living with my brother helped to motivate me to use that by going in to medicine.”

Dr Irvine, who runs what she describes as “a family service,” is fighting to retain the personal touch in the NHS. “A hospital is not a shop,” she says. “Seeing a doctor has become like going to Tesco. There’s a loss of trust between doctor and patient, and we don’t have the time to deal with the complexities of all the new patients we see now.”

“There is a really good evidence base for continuity of service. It’s more popular with doctors and patients, more clinically effective and more efficient, but it’s the one thing politicians don’t want to talk about. Our doctors, like others in the public sector, are being reduced to a set of competencies, delivering something pre-packaged.”

So it’s unsurprising to hear her scathing views on the removal of traditional interaction with patients. “There’s always a narrative that makes it sound like progress,” she says, referring to the reduction of face-to-face appointments with GPs. “But these plans are usually devised by bureaucrats who don’t realise that face-to-face is so often the only way to know what is really wrong with someone. A lot of patients don’t know why they’re coming to the doctor – they just don’t feel right, or they come in for another reason. You can’t diagnose those people by Skype.”

Likewise, she says that hospitals are as necessary as ever – “There’s no evidence that better care in the community prevents hospital admissions. People get ill, they get conditions. This is a myth that’s been created, that we don’t need hospitals.”

She describes an NHS which does not match political rhetoric. Cuts manifest themselves “in subtle ways. We’re told that community care is a priority, but the number of district nurses has gone down by 45% in 10 years.” PFI “is dreadful – we owe £80 billion on £11 billion worth of investment, which is like buying a house with a Wonga loan.” The amount spent on transaction costs – estimated at £5-10 billion per year – is going up as the coalition’s reforms take hold. Privatisation is happening “by stealth,” she notes, as we drive through Haslemere Community Hospital, run by Virgin Care under the NHS badge. “Fake consultation processes” take place. There are “huge issues” in mental health and social care, which will particularly affect Hunt’s constituents. Potential whistleblowers feel “gagged” and “intimidated”.

Bottom-up reform of the NHS, then, and the necessary funding for it to work, are her top priorities, but she says “we think of our party as single-focus, rather than single-issue. Health is a social determinant which should drive wider policies.” This comes across as she suggests, for example, that a proposed multi-storey car park in Haslemere will worsen Surrey’s problem with child obesity, and that children from poorer backgrounds need to be given the chance to study medicine.

The principles which guide her view of the NHS would also be applicable to wider policies, so she says: “the labourer is worth his hire” and “You wouldn’t believe we were one of the richest countries in the world, would you?” And she says that taking responsibility for social ills will alleviate the pressures on the NHS. She tells stories of GPs facing patients with non-medical issues, such as benefits letters, as they do not know where else to go in an era of cuts, and says that the government’s “abuse of volunteers” is hurting care services.

Power is the real issue behind Dr Irvine’s campaign. Her audience speaks of being “fed up with the lot of them,” “very managed” when Hunt visited a local hospital, and angered that the Health Secretary voted against a debate on food banks, which exist in every town in his seemingly wealthy constituency, in parliament. They are hungry for meaningful democracy. In a true blue constituency – Hunt’s majority is 16,318 – which has long been occupied by a minister or shadow minister, they speak of disenfranchisement, apathy and cynicism. They speak of a cliquey local Conservative party, dominant on councils at all levels and in minimal fear of the voters. Some mutter darkly of a “one-party state”.

Dr Irvine, who describes herself as “a community activist” and whose achievements include leading the successful campaign to prevent the closure of Lewisham Hospital, is running an insurgency against what she sees as undemocratic elements in modern British politics. She says: “If we gain MPs, they will vote with their conscience. The whip system is awful. We are putting the focus on listening to people.”

Across the course of the day, she describes Hunt as “complacent,” “a hypocrite” and “in denial”. But her most damning attack on him is that he uses “politician speak”, and her criticisms of top-down meddling in the NHS translate in to an attack on the British political culture as a whole. Hence her view on the Labour party: “Although I think Labour has got better policies than the Tories, I don’t think you can trust them. They brought in PFI and privatisation.” She asserts that the Transatlantic Trade and Investment Partnership is “a secretive agreement, which undermines democracy because it means that national governments can’t make laws based on the interests of their people”; that politicians spin “spurious facts,” such as the cost of ‘health tourism’; and that ministers “are shirking their responsibilities – even Hunt now uses phrases like, ‘I’ve told the NHS to sort this out’”. Her remedies are to rely only on “evidence-based policy” from above and to give power to ordinary people in the decisions that affect their lives. As she puts it: “I don’t think politics should be left to politicians”.

The maths, at this stage at least, obviously favours Hunt, but she says that her decision to stand wasn’t based on concerns over the likely prospect of winning. “Hunt is responsible. He needs to be held to account. Besides, if people only stood where they thought they were going to win from the beginning, you’d only have one or two candidates in each constituency.”

A positive alternative, she hopes, to the politics of diktat from Westminster might capitalise on the feeling of disaffection towards the main parties. The stats from the constituency in 2010 show Hunt’s dominance but also show that there is a target audience for a message against him – 17,000 people voted for the Liberal Democrats, now languishing in the polls, and 27% of eligible voters stayed away from the polls entirely. “Apathy only lasts as long as people feel hopeless,” she says.

The wider context gives her some encouragement. “It could be very exciting if smaller parties have more of a say in this election,” she says. Though the rise of UKIP saddens her – “The NHS relies very much on migrants. It’s so important that we don’t succumb to all this blaming of immigrants” – it does suggest a trend which could favour her. Politicians, she says, are “terrified of social media”, as it exposes them in ways that traditional media does not. And she takes particular heart from the recent referendum in her native part of the UK. “My family were split down the middle, so I won’t say how I would have voted,” she says. “But my sister said, ‘I want to vote for something optimistic, a chance to reshape politics’.”

That, more than anything, is the sentiment that brought a few residents of Haslemere to the Apple Tree.